For over 100 years, cyanide, now managed under the International Cyanide Code, has been the leaching reagent of choice in gold mining because of its high gold recoveries, robustness, relatively low costs and safety when handled properly. Nonetheless, cyanide remains a controversial issue in environmental assessments and permitting processes due largely to public perception and entrenched viewpoints. Cyanide, banned in some jurisdictions, has an ongoing public relations problem and associated cost for the gold mining industry due to the environmental impacts and its potential for lethal effects on human, animal and aquatic life resulting from its possible mismanagement. This has fueled research aimed at identifying and developing less toxic leaching agents to recover gold.

The concept of IPME is a clearly preferable concept to conventional open pit or underground mining in that little surface disturbance occurs, the need for conventional large scale plants and equipment is reduced or eliminated, the permitting cycle for a mining project will be shortened and the ultimate reclamation and restoration of the land and water will be quicker and more efficient.  In-Situ-Recovery (ISR) is the most advanced and effective means of IPME. 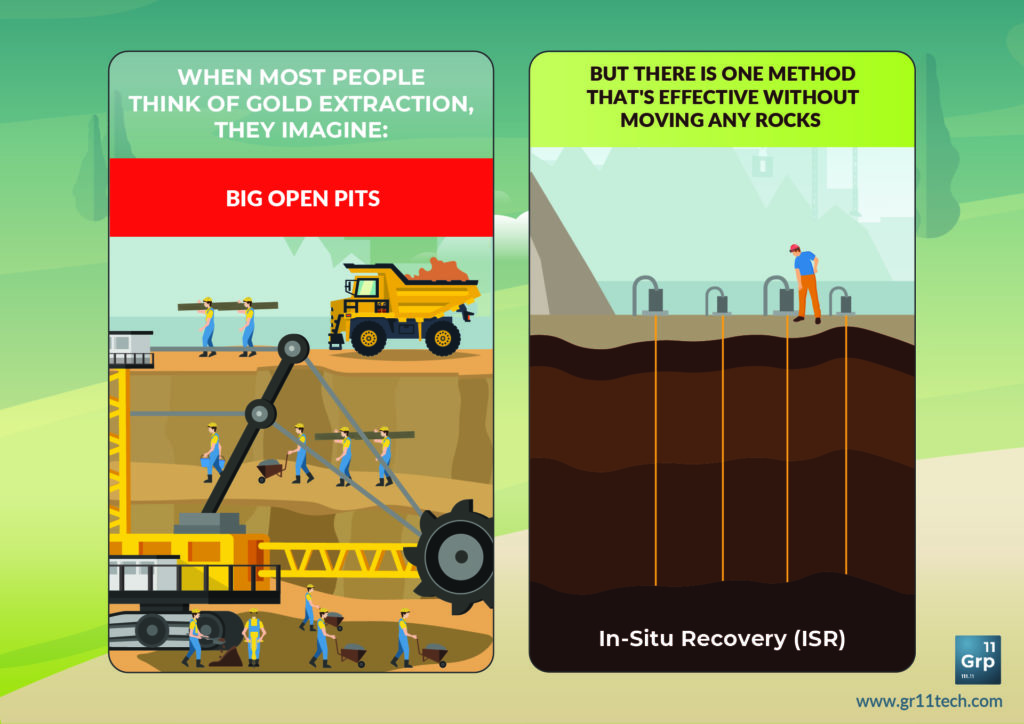 What is In-Situ Recovery (ISR)? 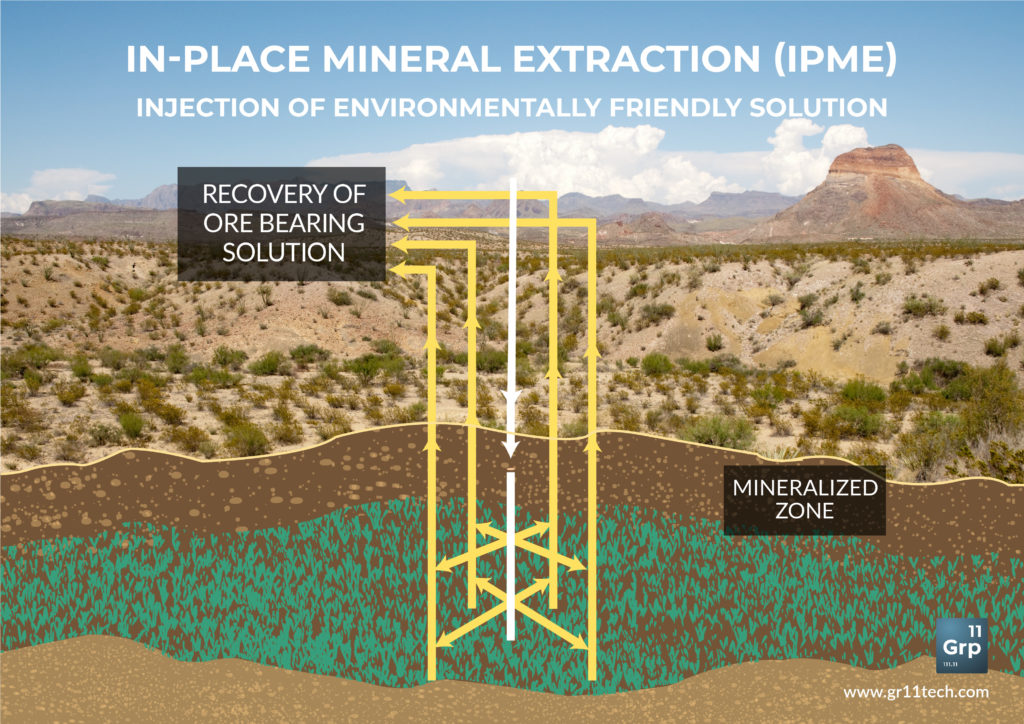 ISR is an environmentally friendly process by which gold can be extracted from the ground with minimal disturbance to the surface environment. ISR mining has a long history, starting with uranium mining in the 1960s. Arizona also has a positive track record for ISR permitting. For example, the San Manuel copper mine, owned by BHP Billiton, was a successful operation that integrated ISR methods with open pit and underground mining and produced approximately 3.25 billion pounds of copper in 14 years of production.

How does ISR work?

In-situ recovery (ISR) is a non-invasive mining method whereby boreholes or “delivery wells” are drilled into an orebody, through which a dilute solution is pumped to dissolve the target minerals or metals. The solution moves through the rock in a controlled manner to nearby recovery wells, where it is pumped back to the surface for processing. Differential pumping rates or natural impermeable barriers are used to control the movement of the solution through the rock. This, combined with well field design, prevent any solution from exiting the mine area. The pumping action of the recovery wells ensures all of the gold-rich or “pregnant solution” is collected from the delivery well.  In ISR mining of copper oxide ores, the dissolving solution is usually sulfuric acid.  The ISR mining of gold uses Envirometal’s proprietary and eco-friendly lixiviant or solution to dissolve the gold. In effect, the boreholes or wells become the “mine access” and the leach pad is “left underground”. Recovery of gold from solution is done by Ion Exchange Resins and electrowinning and the subsequent regeneration of the lixiviant is accomplished using proprietary diamond-based electrochemical cells.

But if this method is so great, how come more companies do not mine this way?

The right chemistry and the right technology…

Until now, there was no leach solution or lixiviant that could dissolve gold in a safe and environmentally friendly manner. The use of cyanide or other toxic chemicals was obviously considered too dangerous for the environment. The recent introduction of Envirometal’s proprietary eco-friendly and safe process has only now opened the door to the advanced research of the in-situ recovery of gold from underground deposits.

The Envirometal’s unique, environmentally safe solution, is water-based and only includes ingredients approved by the FDA for human consumption, The Envirometal solution is fast and offers comparable leach kinetics to that of high-intensity cyanide, assuring high recovery rates.

ISR mining of gold is in its infancy with the first ISR of gold being unintentional, resulting from cyanide seepage from an above-ground tailings impoundment into the ground and subsequently into low-grade gold stopes in a mine in the Northwest Territories in Canada. The water, containing trace amounts of gold, was pumped from the workings and used as process water in the mill resulting in slightly higher gold recoveries.

The first planned ISR operation was to be conducted in Victoria, Australia in the early 1980s. The plan envisioned the injection of alkaline cyanide solution into a deep porous paleo-placer channel. Following initial pump and dye testing, amid public and governmental concern about potential groundwater contamination in the farming area, the project was shelved.

All successful gold ISR projects to date have been in other parts of the world, all have used cyanide, with the first successful test of gold ISR at the Gagarskoye Gold Mine. An early and apparent first test of non-cyanide ISR was conducted at the Ajax mine in Cripple Creek, Colorado by the Golden Cycle company in the 1970’s.

By utilizing Envirometal’s proprietary environmentally superior solvent in combination with enCore’s deep expertise in ISR, Group 11 believes that it has the combination to reshape the traditional gold mining industry through In Place Mineral Extraction.

The first ISR projects were conducted in the uranium industry during the 1960s, with the first commercial operation occurring in 1974. The enCore Energy team, led by Dr. Dennis Stover, an earlier inventor and pioneer in the commercialization of ISR technology, have a wealth of knowledge of all aspects of uranium ISR methods and hold patents relating to the process. In ISR mining, uranium is dissolved by solvents containing either sulfuric acid (Kazakhstan, Australia, etc.) or Sodium Bicarbonate (Baking Soda has replaced the use of acid in the United States ISR uranium industry).

It should be noted that during the infancy of ISR in uranium production the major conventional (open pit or underground mining) producers were adamantly opposed to the development of the ISR model and spent considerable time and money discouraging or disparaging it even after it was proven effective. Change is often difficult for people and often opposed but we believe In Place Mining for gold and precious metals needs change and should be consider for widespread commercial use. Notably, more than 50% of global uranium production now occurs from ISR methods, having successfully displaced open pit and underground operations.

Uranium is not the only metal to be recovered historically by ISR. Several copper ISR projects have operated principally since the 1970’s in the U. S., Chile, Russia, Zambia, Cuba and Australia with overall good results. Primitive ISR copper recovery dates back several thousand years in China. All known copper ISR operations use, or plan to use, acid based lixiviants (liquid solvents). There are currently three active copper ISR projects in the U. S. ranging from the permitting stage to post-pilot operational stage. Excelsior Mining (MIN-TSXV) has the advanced Gunnison project, Copper Fox (CUU-TSXV) has the planned underground ISR Van Dyke project and Taseko Mines (TKO-TSX) has the operational Florence project. All are located in Arizona.

Ability to process sulphide concentrates onsite, without need for a cyanide permit

Superior return both socially and economically for the operator

Can process ‘black sands’ produced from placer mining operations, which are unable to be recovered due to the fine particle size of the free-gold

Opportunity to work with environmental management groups to remediate projects.